Survival of the Fittest

Survival of the fittest 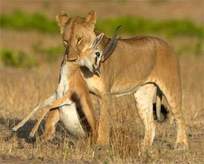 This process is completely natural. The stronger lions kill off weaker gazelles and thus the lion’s genes can be passed on whereas the gazelles’ cannot. The weak lions that cannot catch any gazelle cannot obtain enough food and die off. Therefore the weak lions’ genes cannot be passed on. The strong gazelles who are not caught by the lions can live and pass on their genes to the next generation. Therefore the "'fittest' tend to pass on more of their genes to the next generation. Survival of the fittest is the natural way the animal kingdom works.

How does this affect society?